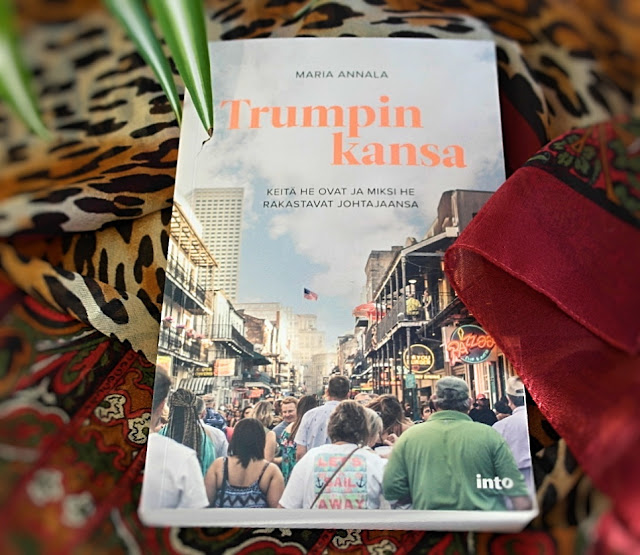 "I am the Chosen one," he announced directing his eyes up to Heaven
when answering a journalist's question about the trade war with China.

Here is the book review that I promised. It is long, sorry.

The Trump phenomenon seen from Europe is quite confusing. How could a candidate with careless and reckless tweets, racist, and misogynistic comments be elected as President of the United States? The Trump People by the journalist Maria Annala sheds light on the reasons behind Trump's success. Annala lived in Boston 2015-2019 and closely followed the previous presidential campaign of 2016. The book describes countless studies on voting behavior by party and by demographic criteria, the role of the press, and opinion polls.

The perspective of the ordinary people on Trump ecstasy is brought by the three Virginians who worked in his election campaign. Alice Butler-Short is an Irish-born woman of over seventies who founded the Virginia Women for Trump movement and says she will campaign also this year for her idol and then focus on her grandchildren. Christianné Allen was only 16 when she joined the Trump campaign. She has found a career in politics and is now working for Trump's personal lawyer Rudy Giuliano (and is in the eye of the Ukraine commotion!).  Law student Brian Landrum found a career in political digital marketing and works for the Blitz Digital Group. From my point of view, they are all unlikely Trump supporters: two youngsters who amazingly share their nominee's conservative opinions and the wealthy, smart and stylish Alice who swallows any comments that belittle woman! Because of this common astonishment Annala wanted to tell about grassroots actors:

My book came from the realization that it was difficult, if not impossible, for my Finnish friends and acquaintances to understand the Trump phenomenon. In the United States, many of my friends and acquaintances were amazed, but they generally knew even one Trump supporter. Finns are less likely to know Trump's supporters personally, and news stories alone make it easy to get a one-sided picture. Through my book, readers will get to know three of Trump's supporters, which will hopefully help give them a more diverse perspective.

According to Annala, the population in the United States has been divided sharper than ever in different camps: Republicans vs Democrats & Trump's supporters vs opponents. Apparently, the escalation of the last elections and the choice of sides broke down friendships and drove family members into dispute. An equally sharp division seems to be in the groups whites vs. colored. White Americans fear they will be in the minority in the next few years, which is why Trump's strict anti-immigration attitude was and is manna to them. According to Trump, Mexicans are rapists and drug dealers and all Muslims are terrorists. A proper wall for the Mexican border has not been achieved, as Trump hoped. However, illegal immigration from Mexico has decreased and five Muslim countries (Iran, Libya, Somalia, Syria & Yemen) have been denied entry. The same goes for North Koreans and Venzuelans.

Trump had and still has the support of value conservative evangelical Christians because they think the same way. Support of this group has been boosted by a desire to reduce abortion and adoption rights. Adoption of rainbow families has been made difficult, but the Equal Marriage Act has not been annulled. Trump is known for his misogynistic and racist comments. He advised e.g. four colored female Democrats in the House of Representatives to return to their home countries.

Annala presents a multitude of Trump's outrageous opinions. After reading the book I'm as confused as ever. The most amazing thing is that women - and women of color too - voted for Trump. According to Annala this is because not all American women want equality between genders - as we do here. It seems the people were tired of Washington's party elite politics and wanted a fresh outsider as president. The people wanted an authoritarian leader who would save the forgotten and marginalized inhabitants of the countryside and make their dream come true: America First! - Make America Great Again! This is where the climate, global trade and mobility loose and patriotism wins.

The candidacy for the presidential election in the autumn of 2020 is already hot. Unless the economy collapses before the election, Trump is constantly on the rise in public opinion. The US economy has been doing well for the last three years, but there are clouds in the sky. Trump has said he rescues US coal mines, but his trade war with China has prevented coal from being exported there and the industry is undergoing a bankruptcy wave. One of the Democratic nominees is Joe Biden, whose son has been accused by Trump and the president is being charged with impeachment. Never before has a candidate accused of impeachment been presidential candidate. We'll see. Trump has seized power and surrounded himself with value-conservative judges.

A couple of years ago, I read Timothy Snyder's work on Tyranny, where he warned against Trump. As I said earlier, after reading The Trump People, I am just as embarrassed, but the book is top good and has a good insight. For example it was utterly interesting to read about the mainstream media vs right-wing media bubble, Fox and Breitbart. It must be admitted that Trump has charisma and is adored - even by women! - his supporters always turn things around for the best. 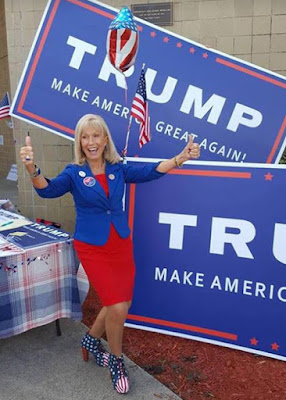 Timothy Snyder:
There are four ways how the truth dies: 1) Exposing fiction and lies as truths. 2) Shamanistic incantation or repetition. 3) Magical thinking, or unstoppable contradiction. 4) Distortion of faith.
In this essay, Snyder loudly accuses Trump with many examples and explains how propaganda drumming worked  with the Nazis.

In the photo the elegant Alice dressed up in US colors. At Youtube you’ll find many videos with her.